The Science of Willpower and How to Have More of It

Willpower helps you tackle the hard stuff. The important stuff. The stuff that makes a real difference. But most of us don’t know the science of willpower, which has been well-researched over the last 10 years. Or that there are things you’re doing throughout your day that undercut it. (Seriously.) Or that you can boost it on demand. I’ll show you how you’re killing your own willpower and give you a few ways to boost willpower. 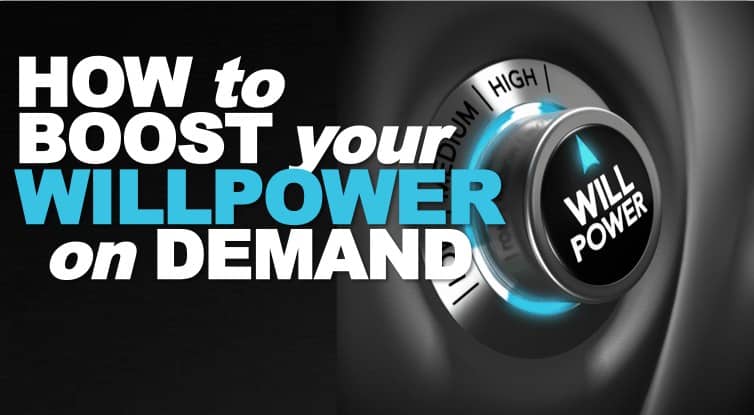 What? I can boost willpower on demand? Yep.

What Exactly Is Willpower?

What is willpower? The typical dictionary definition is something like: self-control deliberately exerted to do something or to restrain one’s own impulses.

So it’s not just willpower (“I will do the harder-but-more-noble thing”), it’s also “won’t-power” (“I won’t do this tempting thing that is not in my long-term interest”).

The more willpower — and won’t-power — you’re able to bring to the battle, the better you can control your attention, emotions and actions. And with that better control, you’re statistically likelier to be happy and healthy, to make more money and so on.

But the other key thing to know about willpower is that it is a depletable resource, like gas in your car’s fuel tank. And there are things you’re doing throughout your day that are needlessly burning it. How to refuel? There are at least eight ways, a few of which I’ll share shortly. But first…

How You’re Undercutting Your Willpower

As Stanford psychologist Kelly McGonigal, Ph.D. and author of “The Willpower Instinct,” explains, willpower is what allows you to resist temptation, make tough decisions, manage your emotions and regulate your behavior. But from the moment you get out of bed, your willpower fuel tank is heading toward empty throughout the day. Ironically, four things that accelerate that fuel burn are resisting temptations, making tough decisions, managing your emotions and regulating your behavior. So you only have so much fuel each day, and doing the right things burns it! 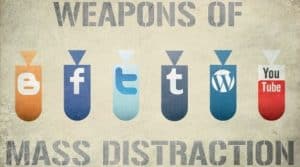 But there are other, not-so-right, things you’re doing that further exhaust your willpower fuel. That’s right — you’re undermining your own willpower every day. We all are. Let’s look at a few of these in the context of a hypothetical work day.

First thing at your desk and ready to get busy, you’re interrupted by a phone call — your boss insists that you attend an unscheduled meeting, right now. You let yourself get stressed about it and that burns some willpower.

You get to the meeting — a boring one — and you impatiently start multitasking — listening to the meeting, taking notes, checking and responding to emails and texting with a client.

After the meeting, you partake in some pseudo-productivity — emails, texts, emails, YouTubing, emails — until it’s lunch time…

And because your a bit ticked off and frustrated, you opt for some fast food instead of the kale salad you had planned on having…

I could go on, but the point is, many common-sense poor choices whittle away your willpower. But on to some solutions…

A Few Ways to Boost Your Willpower 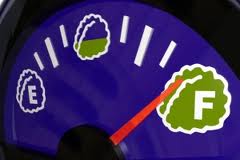 The good news is there are things you can do to improve willpower fuel economy and even refill your tank throughout your day. Many, in fact. Here are just a few…

1) Know Your Willpower Signals
Psychologist McGonigal says, “Knowing how you are likely to give in doesn’t, as many people fear, set you up for failure. It allows you to support yourself and avoid the traps that lead to willpower failures.”

So, you have to get in touch with when you’re low on fuel. Because when you are low and you don’t acknowledge it, it’s a triple whammy of frustration, additional fuel-burning and confidence-crushing as you fail to get results from your efforts.

How do you know when you’re low?

When you’re hungry, especially if you’re craving sugar, carbs or junk food. This is your brain screaming for glucose. But don’t take that bait. (Stick with proteins for brain fuel.) Also, when you’re fatigued, sleepy or grumpy.

Knowing when you’re running low allows you to pause and refuel (whether with food, a power nap or quick meditation), rather than just get more and more frustrated.

2) Score Your (Even Small) Successes
In her book, The Progress Principle, Harvard Business School’s Teresa Amabile says we should “record small wins that otherwise might slip through your memory.” Her research into the progress principle shows that you get a huge boost just from realizing you are making even small progress.

That means that when you can get started and just move something forward even a little bit on a meaningful to-do, you will experience a snowball effect in motivation — thus boosting your willpower.

3) Know and Obey Your Ultradian Clock 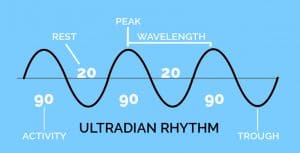 You’ve heard of your circadian clock, that inborn system that tells you when it’s time to sleep and time to wake. Your ultradian clock controls your exertion and recovery rhythm throughout the day. And we tend to operate in 90-minute cycles, which is one reason I try to do singletasking sprints of 90 minutes, followed by a brief rest.

Of course, everyone’s a little different. The key thing is that you know your optimal sprint/rest cycle and also your strong and weak times of the day. This way you’re attacking your toughest willpower-burning demands during your strong times and not expecting too much of yourself in your weak times.

Multitasking burns gas like a ’68 Camaro because it involves task-switching and repeated decision-making and task-initiating — all fuel-burners — so singletasking is the Prius of work modalities. Just one more reason to get with the singletasking sessions! [CLICK HERE to watch the preview of Episode 68: 4 Power Rituals That Will Change Your Life, where I teach how to create a singletasking ritual.]

4) Pride and Shaming
Psychologist David Desteno says social emotions like pride and shame have a quicker and more direct influence over our actions than rational arguments about long-term costs and benefits (i.e., “I want to live healthier” doesn’t really boost willpower). He calls it “hot self-control.”

Examples here are thinking about your 9-year-old child before lighting up a smoke or imagining the pride you’ll feel by nailing that presentation a week early. Whether shame or pride, it has to be anticipatory. It can’t be beating yourself up with negative self-talk about the past — that is counterproductive.

5) Practice
In Crusher™TV Episode 45: The Power of No, I talked about how practicing the easy nos helps you build your “no muscle.”

And like the willpower muscle, the more you use it, the stronger it gets. Practice self-control on the easy ones — not checking your email or news apps constantly, not having that sugary snack.

Then either share your victory with someone — or journal it (i.e., score that victory!), which will help motivate you next time your willpower is called upon.

How Much Can You Boost Willpower?

Stanford’s Carol Dweck says that, “[Willpower is] not unlimited — at some point you do need to replenish it.” But, she adds, “it’s a much larger resource than previously thought.” And those who believe they have abundant, replenishable willpower are able to push on.

Begin to believe in your power over your willpower and you’ll soon need a bigger fuel tank. And also know that, whatever’s in your way is yours to crush!

There are many more ways to boost willpower — Goal Contagion, The 4-7-8 Technique, Systems-vs-Tasks, The 5 Whys — and more (I LOVE this stuff!), and I dedicated an episode of Crusher™TV to 8 Ways to Boost Willpower.

If these distinctions and solutions resonated with you, consider becoming a member of Crusher™ TV and check out Episode 54, on which this is based. www.CrusherTV.com. Click the image below to preview that episode. 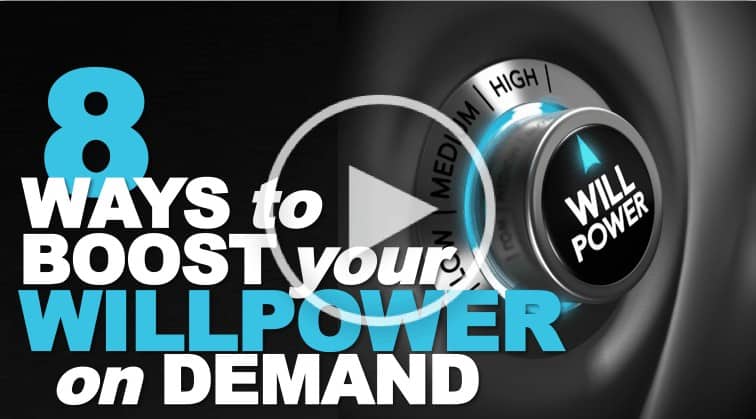 P.S. You might get a lot out of watching that entire Episode 54 on Crusher™TV where I dig deeper into this topic. (You can become a member for a buck and cancel any time you like.) You can preview that episode above or head to Crusher™TV and become a member!

Loved the article and great tips. Thanks a lot

You’re welcome, Cinderella! So glad this resonated with you!